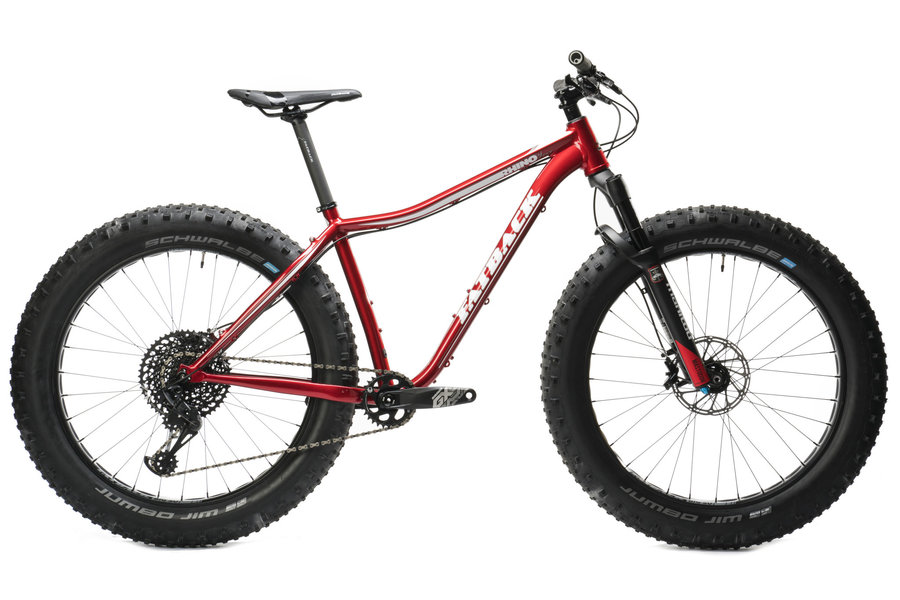 The all new Rhino FLT won Fatback another award being chosen best fatbike of 2020 by Outside Magazine. Our progressive geometry combines attributes from our award winning Corvus carbon frame as well as our Skookum, which is the rowdiest fat bike available

WHY MAKE THE RHINO FLT?

We strive to design and produce the best frames (and components) available anywhere. We didn't jump on the fatbike bandwagon, we started it! We knew the Rhino was an amazing bike from the first ride, but not everyone needed sliding drop outs, so we set to work shaving weight with vertical drop outs, lighter seat and down tubes, and the result speak for themselves, as we dropped almost 2lbs, while adding internal routing for a dropper post. One ride and you'll see why we were chosen as one of 2020's best fatbikes!

WHY MAKE THE RHINO FLT?

We strive to design and produce the best frames (and components) available anywhere. We didn't jump on the fatbike bandwagon, we started it! We knew the Rhino was an amazing bike from the first ride, but not everyone needed sliding drop outs, so we set to work shaving weight with vertical drop outs, lighter seat and down tubes, and the result speak for themselves, as we dropped almost 2lbs, while adding internal routing for a dropper post. One ride and you'll see why we were chosen as one of 2020's best fatbikes!

I was due for a “21st century” fat bike, and the FatBack Rhino FLT was the ticket!!
An email to FatBack Bikes, and a call to my LBS... and boom I was in business to purchase this bike from my now FatBack authorized dealer of an LBS.
This bike checked all my boxes:
Threaded BB.
The ability to run the fattest rubber on the widest rims.
Through axles.
TLR wheelset.
I choose the Sram GX Eagle build, upgraded to a carbon fork, and added the “big boy” Johnny 5’s.
I’m coming from 11 plus years on a Pugsley.... so this FatBack Rhino FLT is an absolute breath of fresh air..... in its geometry alone; everything else above is just icing on my new fat-bike cake!!
My Pugsley treated me well.... but it was time.....
“Fuzzy” John was very patient with every question I had; and I had a lot!! Thanks John!!
You can tell FatBack does one thing, and they do it very very well.
This bike is a beauty, has every mount you could ask for.... my new bike-packing rig??
The 100mm BB which does not feel like a 100mm BB..... well thought out design guys!!
This Rhino FLT handles snow like a champ, is extremely snappy even with the meaty Johnny 5’s.
I’m highly anticipating getting this rig on some Iron Range red dirt in a few short months.
Thanks again FatBack!!

Looked at a lot of options before deciding on the Rhino FLT. I wanted a bike that can serve more than one role, as I can't justify purchasing something that will sit in the garage half the year. Winter riding, summer trail riding, bikepacking adventures, the Rhino checks the boxes. I'm particularly impressed with how it handles my favorite singletrack trails in the snow - it handles like a nimble mountain bike with a little extra confidence built in. Looking forward to entering some fat bike races this winter, before tackling some bikepacking trips come spring. Excited to try out the rhino in multiple roles.

I am enamored with this bike. It snaps around in corners, has a respectably high BB (THANK GOD NO PEDAL STRIKES!), and is one of the most well thought-out designs I have seen in a long time.
Mine is a typical mechanic's frankenbike with regards to spec but man, is it fun. It is solid and predictable. I switch it back and forth between running with a carbon Fatback fork and a Mastodon. It is a blast in both guises so, yeah...I'm digging it.

I'm a cross country skier at heart but when the American Birkebiener was cancelled in 2017 I was already committed to a trip to Wisconsin. With not enough snow to ski on I decided to buy a fatbike. I went to my favorite LBS and rode bikes ranging from 1500$ to 5000$. I took them all around the block but I only had to ride the Rhino FLT about 10 feet before I knew I had found the bike for me. I turned around, went back inside and bought it. Now a year later I still really like it. It feels nimble for a fatbike and climbs like a tractor. (this is good)...
My friends admire the paint job and so far it's been 100% reliable. It's fun to ride, shifts well, the geometry suits my riding style and I feel confident chasing KOM's knowing the bike will perform better than I can.
I'd buy another one.

I test rode all the major fat bikes and hated them because they felt truckish. The geometry on the bikes was wrong and too much weight was on the front wheel making it steer like a truck. I wanted a bike that felt like a mountain bike, not a fat bike. The rhino is not your typical fatbike. It is nimble quick and definitely not truckish. I specd mine with Shimano slx and I am impressed it shifts and stops as well as my Ibis bike specced with Shimano XT 11 speed. In the summer I switch out the 26" fat wheels for 27.5 Stan's Baron wheels. I have an incredible bike for bike backing and a great spare bike for my son or friend to ride. Totally satisfied with this bike and I now get why people love fatback bikes. Keep up the good work.

I have both the Rhino FLT and Skookum, but I set them up a bit different and love having both. My Rhino is set up rigid while my Skookum has a Manitou Mastodon fork. Like the Skookum, I ride my Rhino on a bit of everything. The rigid fork gives a direct and precise feel on technical lines. Most trials lines are easiest on a rigid and this bike can handle some pretty tough sections. It is also great for pumping through rollers and finding roots, rocks, and other obstacles on the trail that can be used to gain speed from pumping. The FLT frame saved quite a bit of weight over the last Rhino frame, and that is definitely noticeable on climbs and while maneuvering the bike. While it is not as light as the Skookum, it is a great option if you don't want to go carbon. While I like my Skookum just a bit more, I would be happy with either bike.

Add your review
5 stars based on 6 reviews 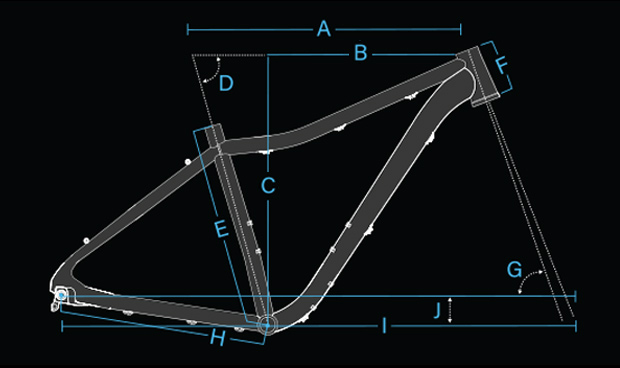 What it takes to be a Fatback FLT

The crew here at Fatback Bikes is always making tweaks to their personal bikes to make them just a little better; trying new tires, brakes, drivetrains… So naturally, we do the same with the products we make. We ask ourselves, "can we make is stiffer, lighter, more comfortable, and increase cold weather performance? Can we improve clearance for larger tires while maintaining narrow Q-factor?" Each model is designed for a certain purpose, we focus on what will make it pedal, handle and look better than ever. Each little aspect is contemplated to see what we can improve. With this dedication to improvement, we have released the new FLT product line focusing on lightweight, high performance and premium ride quality bicycle frames and components. 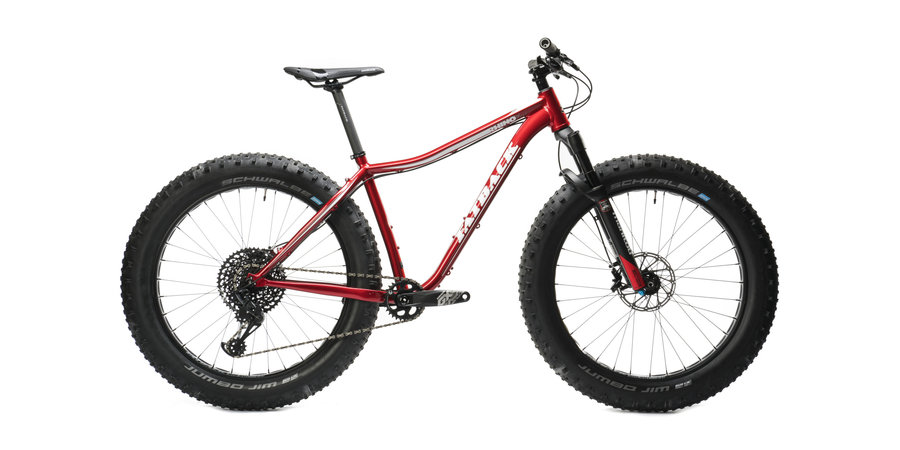 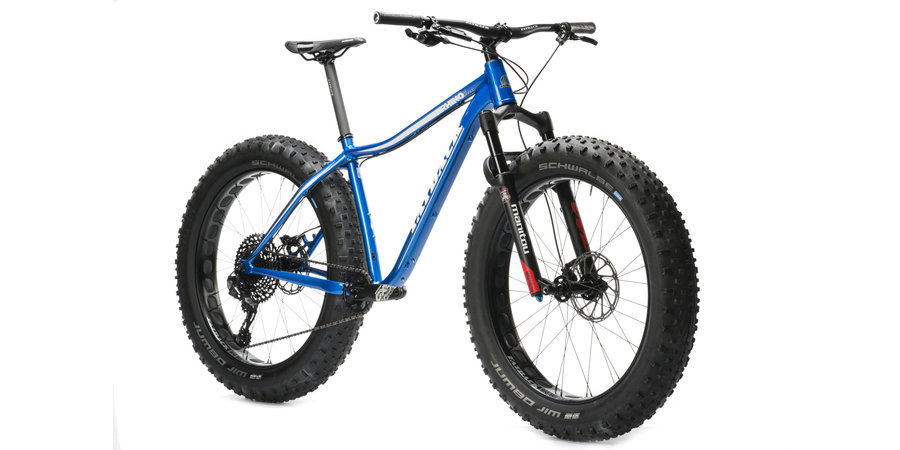 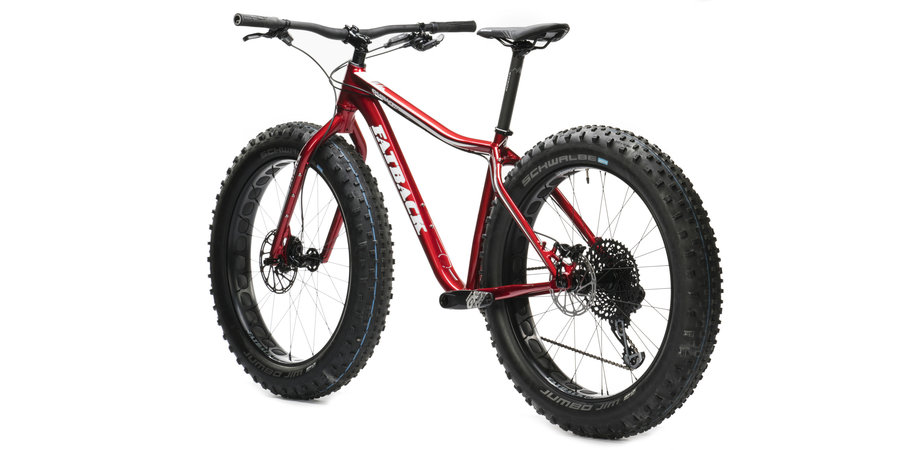 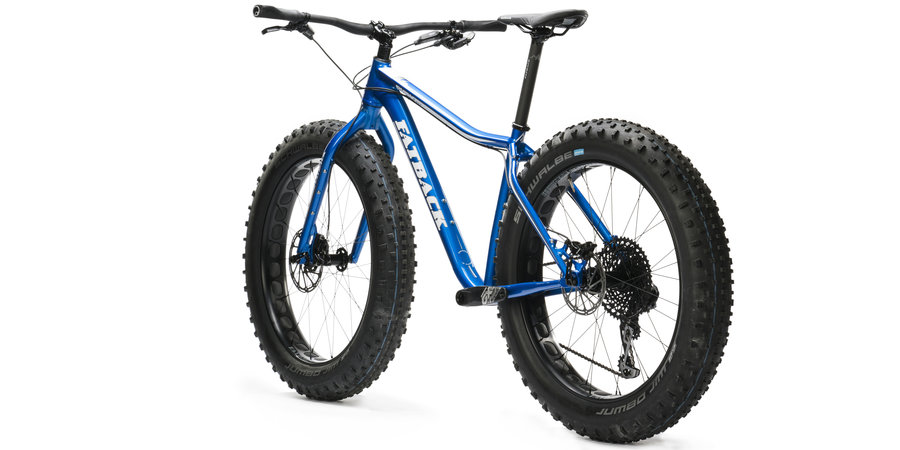 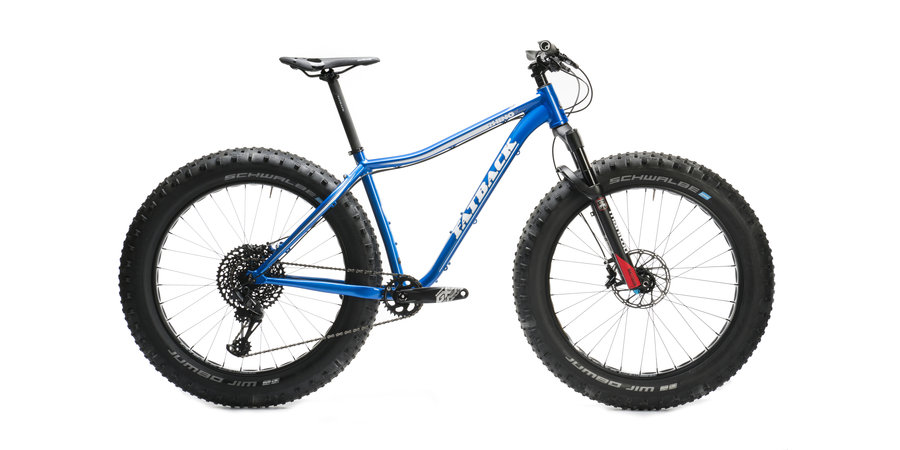 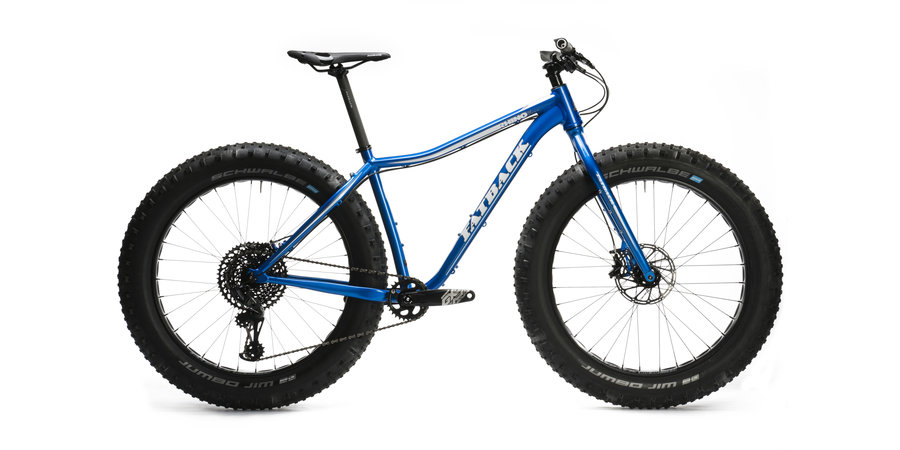 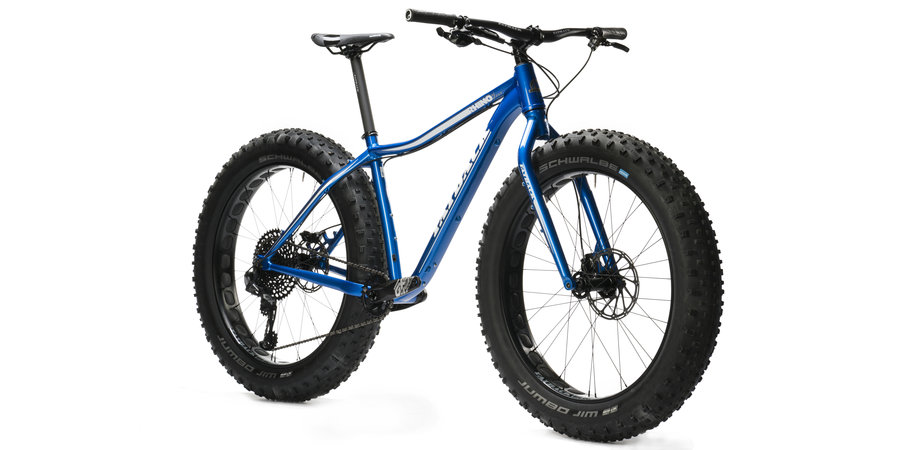 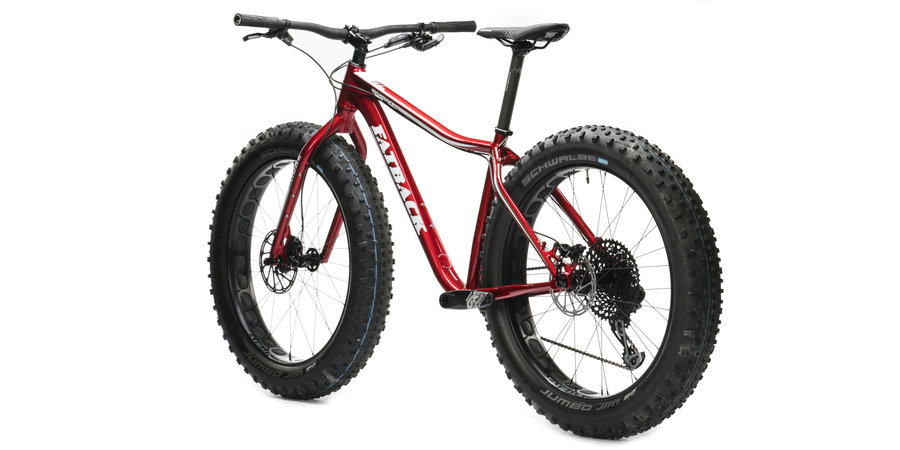 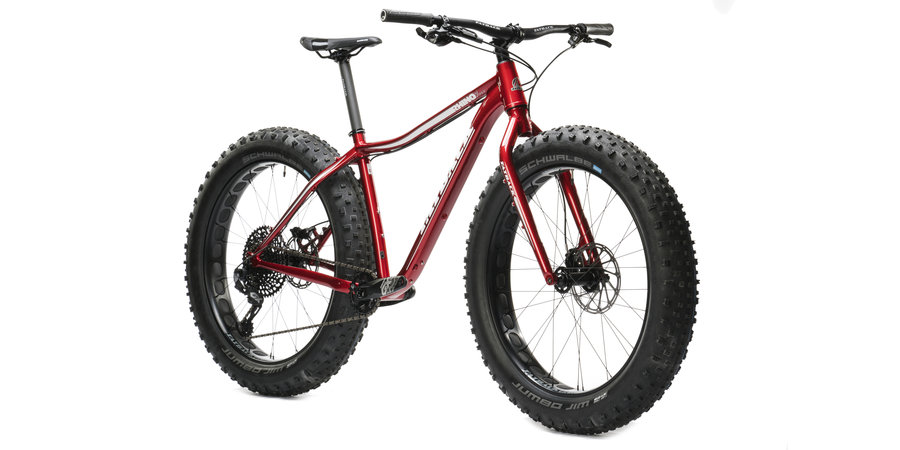 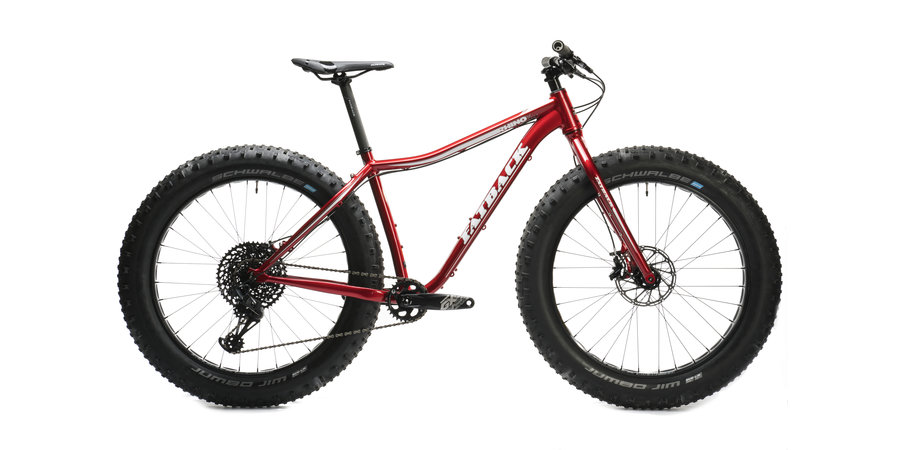 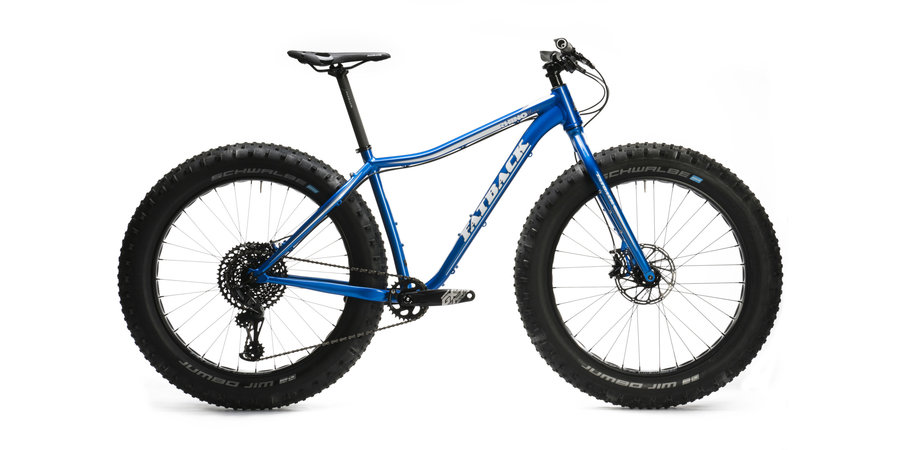 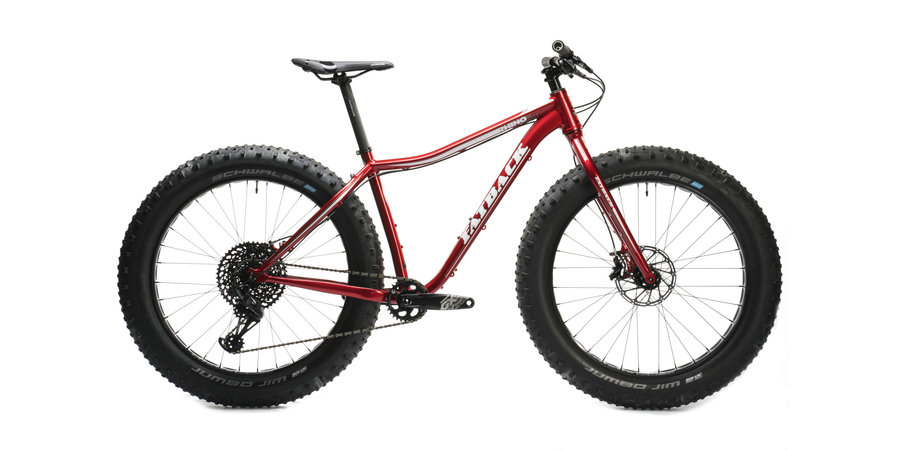